The Windows Powershell from Microsoft is a free extensible automation engine from Microsoft, consisting of a command-line shell and associated scripting language. 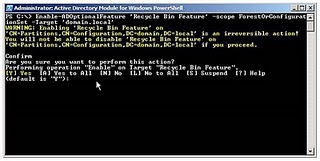 It is an automation engine that relies on the Microsoft .NET Framework and involves the execution of cmdlets which are basically speicialized .NET classes which implement specific operations.

It can however be used to perform a variety of functions on the Windows Platform. It can also be used to query data from Active Directory and to perform common day-to-day aspects of AD management.

One advantge of using Powershell is that it makes it easy for IT admins to derive greater value out of their efforts in scripting so they can automate (at least parts of) common day-to-day IT management and reporting tasks. It also lets IT admins leverage the work of other admins as these scripts can be shared with the community.

The disadvantage of PowerShell is that it relies largely on the development of scripts and even though it makes it easier to derive greater value from scripts, it certainly leaves the possibility of human error. It also takes additional effort to generate reports that are in a presentable fashion and decent enough for submission for any audit or as regulatory compliance evidence.

Jesse
I'm a Jr. Windows IT Admin working at a NYC based non-profit.